The Quadrans network, open-source, public, decentralised and sustainable blockchain for storage and data sharing is designed to scale effectively for global adoption to improve the execution of processes and facilitate data management.

In October 2022 Quadrans Foundation updated the review of the Quadrans network’s energy impact. 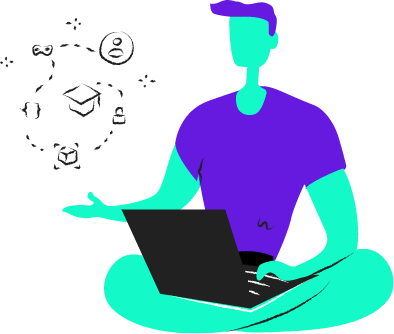 
Quadrans is a sustainable blockchain that performs energy-efficient transactions. Over the past year, the Quadrans Foundation has carried out an analysis to understand how large Quadrans' energy footprint actually is.

Quadrans impact was analyzed by considering social development not only economically but also environmentally. With the information available in the Quadrans network status, the carbon footprint of the Quadrans blockchain can be instantly extracted based on the activity and location of the nodes. Quadrans' first blockchain sustainability report focuses primarily on its network activity and carbon footprint and looks at its three different entities: Lightnodes, Miners and Masternodes.

The report revealed how Quadrans' energy use compares to day-to-day activities, as well as other current blockchain networks - and highlights how the energy cost of Quadrans' network transactions is nearly negligible compared to its social purpose in protecting and storing data.

The validator network remains stable over time with a +1% growth on previous month supporting the overall strength of the network and decentralization goals. Yet any resulting emissions will be mitigated through continued network development. Indeed, the network overall consumption (Kw/h) increased by 1.11% while the CO2 produced increased by 1.11% compared to the previous month. 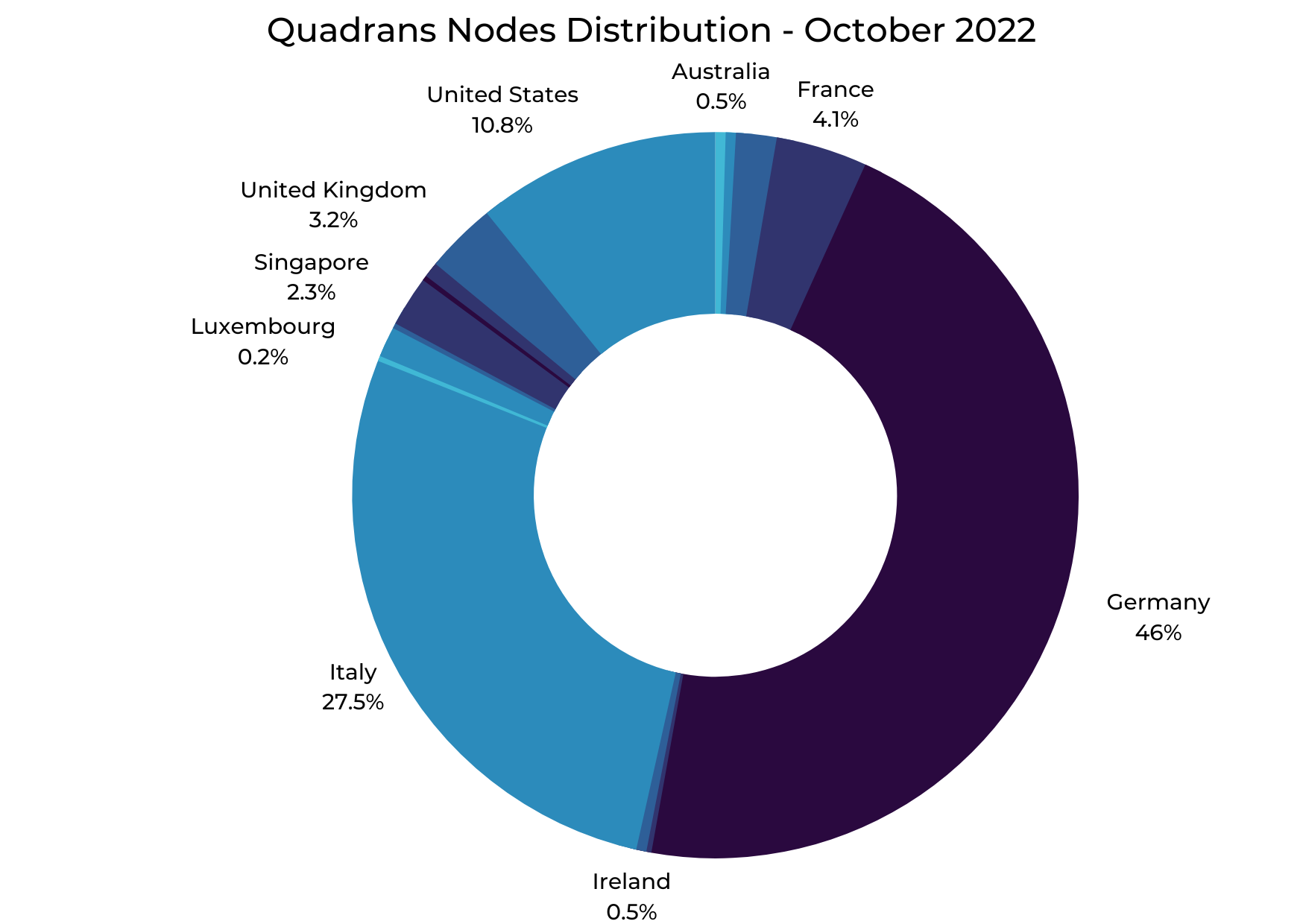 
When evaluating grants for new projects, it is in the Quadrans Foundation's interest to disitribute its energy impact and consider the carbon footprint of its nodes.

The Quadrans Foundation is committed not only to the overall distribution of the Consensus but also to the mitigation of energy consumption (however low) in specific areas. 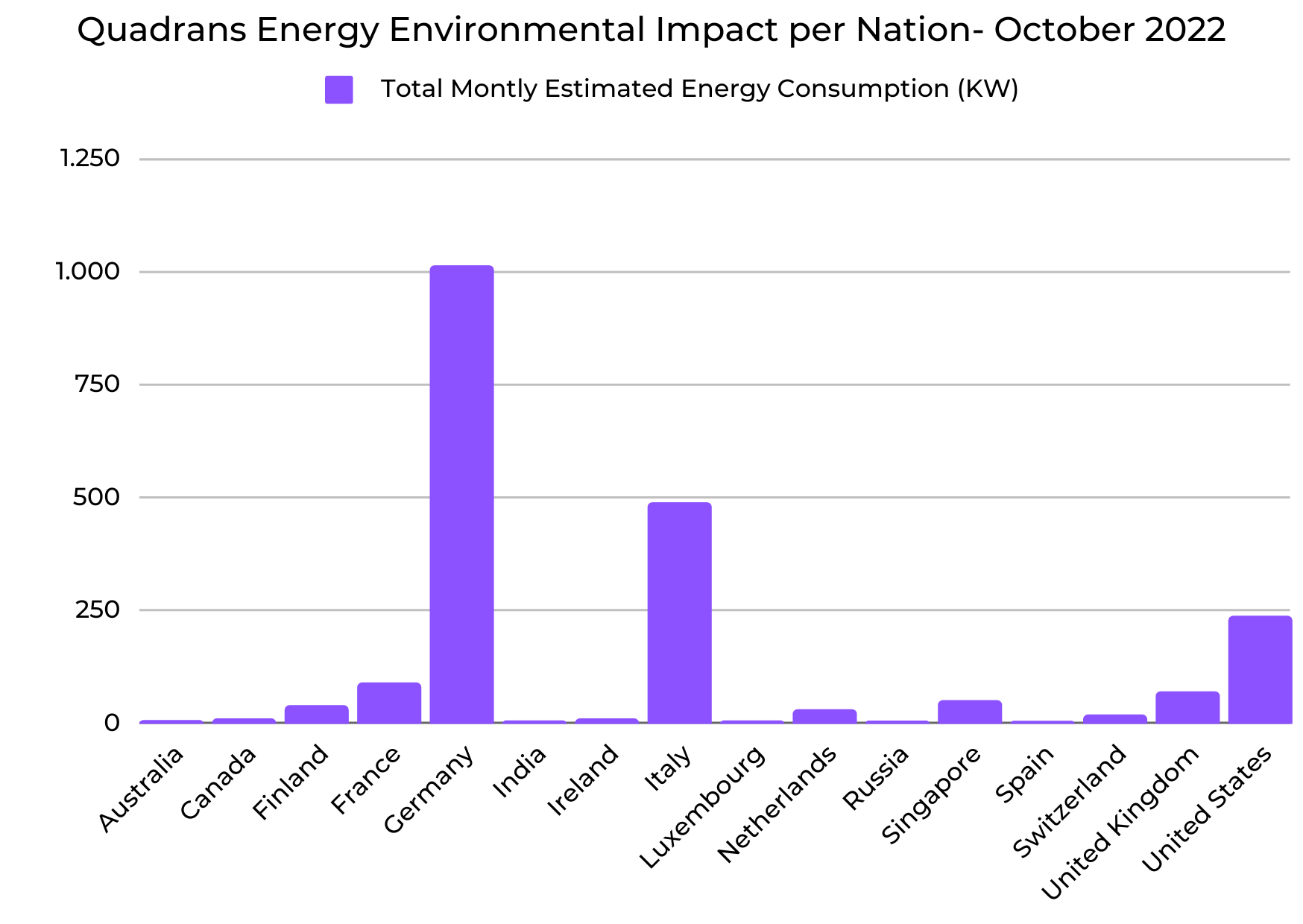 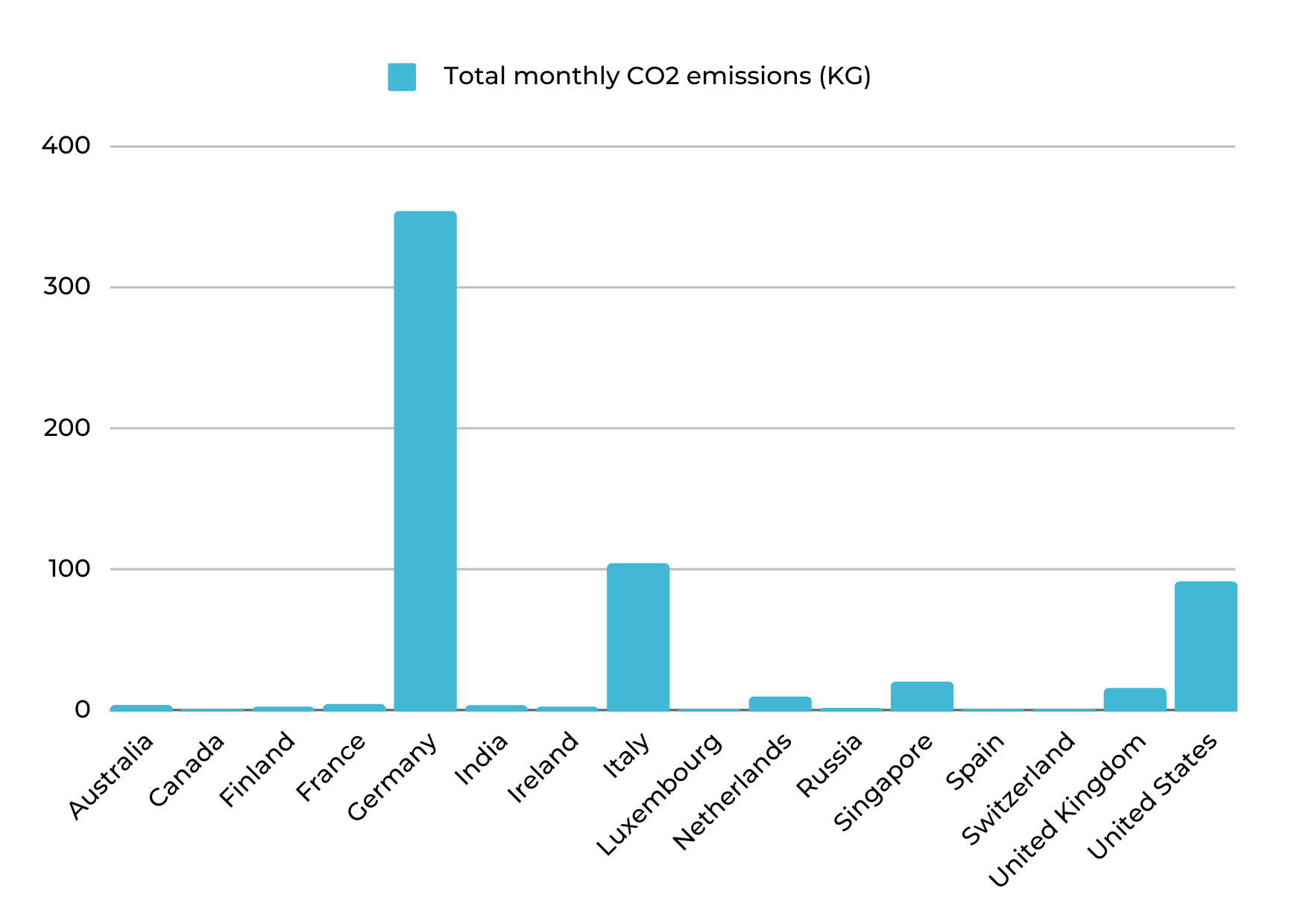 
Comparing the energy intensity of a Quadrans transaction to a Bitcoin transaction is the same as comparing your way to the supermarket to the maximum Earth-Sun distance (about 150 billion KM).

On a more simple note, with the energy required to fully charge an IPhone 13 battery, you can perform 1 million Quadrans transactions. 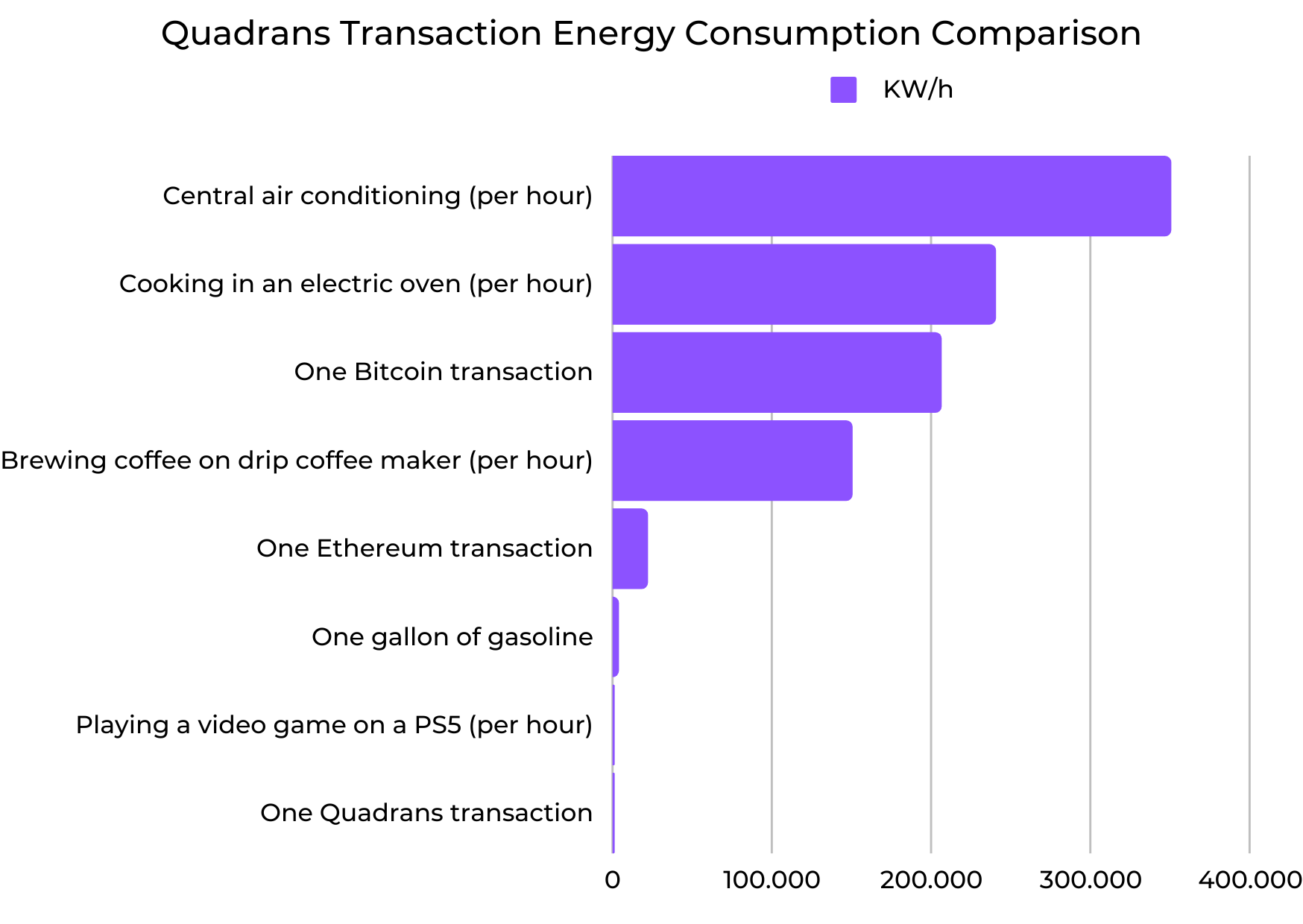 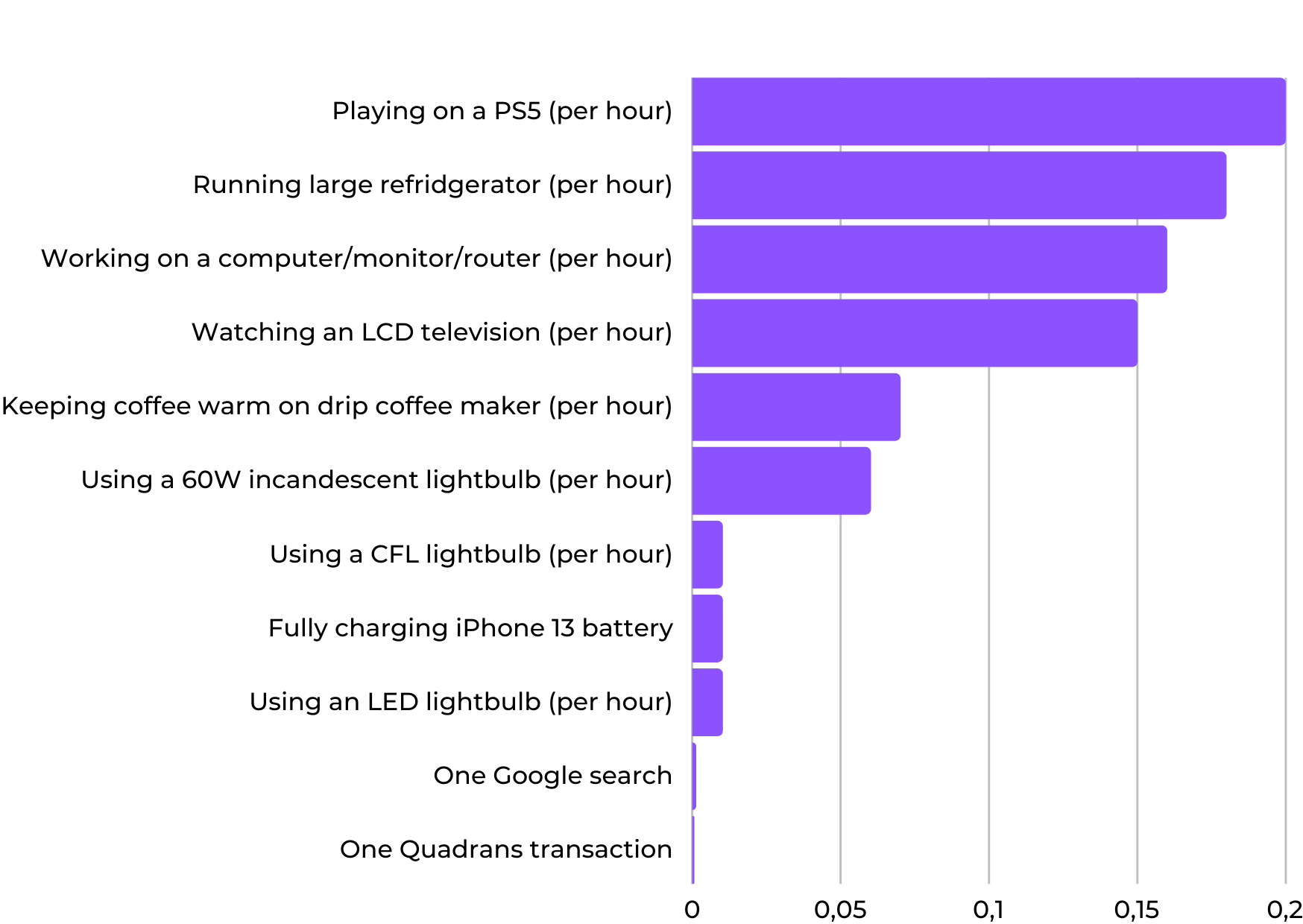